Eagles melt down vs Ravens, lose 36-7

Share All sharing options for: Eagles melt down vs Ravens, lose 36-7 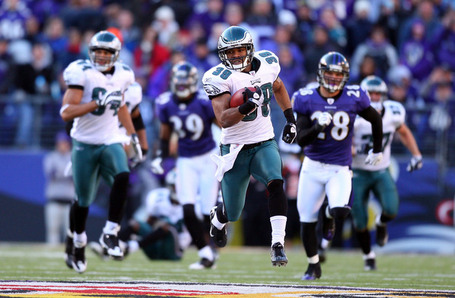 McNabb benched... is it for good?

Donovan McNabb turned the ball over 3 times in the first half and was left on the bench when the Eagles came out for the 3rd quarter. His three turnovers in the first half today gave him seven in two games. Clearly at the end of that first half McNabb was probably knee deep in the worst stretch of his career.

So enter Kevin Kolb... The QB changed, but the results or playcalling really didn't. Kolb threw 2 picks including one in the end zone that went for 6 the other way. Now, the fact that Kolb entered a game in the second half on the road against the NFL's #2 ranked defense with no first team preparation during the week and looked like a guy seeing first real NFL action is not a big surprise. He looked like a bundle of nerves to start and made rookie mistakes, including the decision to try and force the pass in the end zone rather than just throw it away when nothing was there.

The question now is whether to stick him with him and let him go through the growing pains that young QBs go through... or do you back to McNabb and hope that sitting him in this game lit some sort of fire underneath him? We should get that answer very soon since the Eagles have just 3 days to prepare for the Cardinals.

In his post game press conference Andy Reid said that he has not decided on his starter for Thursday.

Benching a surprise to McNabb and Kolb

During his post game press conference, Andy admitted that he did not tell McNabb that he was being benched at halftime, nor did he tell Kolb that he would start. Presumably, both players found out when they took the field for the second half. So not only did Kolb get no time to prepare during the week, he didn't even have halftime to get ready... There's a recipe for success.

The lone Eagles TD came on a Quintin Demps kickoff return. The Eagles offense did not score.

There were about 44 or 45 called pass plays(inlcuding a few QB scrambles) and 17 called run plays. One run play was by Desean Jackson from the wildcat formation.

So clearly there was absolutely no balance. Absolutely no more commitment to the run... Just more of the same.

The Eagles defense absolutely came to play today. They played more than good enough to win. For the vast majority of the game they stifled the Raven's rush, had Flacco under constant pressure, and made big third down stops. Almost 40 of the Ravens' 110 yards of team rushing came in garbage time when the game was well out of hand.

That's two straight weeks now where the defense held up it's end of the bargain, but the offense did not.

This is a weird moment to be an Eagles fan or a person who writes about the Eagles. There's really no time to dwell on this game since the Eagles play again on Thursday... but then again in many ways this is a momentous day in the Reid/McNabb era. Hopefully we'll get some answers about who starts this Sunday soon.