Does Marty Mornhinweg sound frustrated to you?

Share All sharing options for: Does Marty Mornhinweg sound frustrated to you? 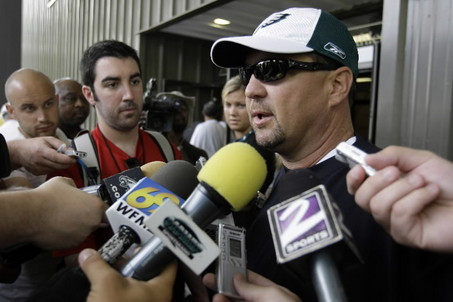 It's no secret that Andy Reid runs the Eagles offense. He calls the plays. Reid performs the duties that the offensive coordinator of most teams does.

Now that doesn't mean Marty Mornhinweg is just a hollow figurehead... I'm sure he has input and Reid does respect his opinion, but there's no doubt that Andy is in control. So when the local media asks Marty questions about the offense, you can help but wonder if Marty agreeing with critics is his way of criticizing his boss.

Was five carries in the first half enough to justify the extent to which the Eagles abandoned the run in Cincinnati (18 runs, 60 called passes)?

"No," Mornhinweg said. "You make a good point. You're right. It's not enough."

Mornhinweg was asked if it would make sense to play Correll Buckhalter more, with Brian Westbrook banged up.

In 2006, when Marty was publicly given the playcalling duties down the stretch we all saw how the team relied on the run more heavily. In those final 5 or 6 games where Marty took over, the Eagles ran the ball over 20 or 30 times in all but that final meaningless game against Atlanta when the starters rested. When Marty was offensive coordinator in San Francisco, he had the #1 rushing attack in the NFL.

Maybe I'm reading too much into this, but when I read Marty's short responses to reporters questions about the run game, it took it as "Yeah, I know... what do you want me to do about it?"