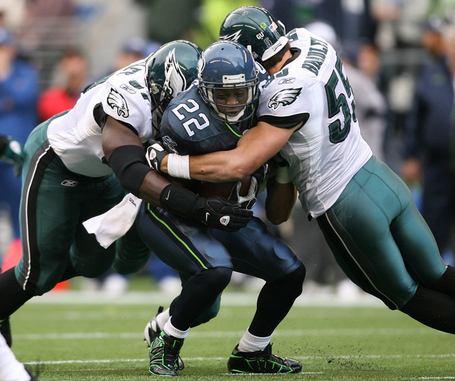 Was it a completely dominant thrashing not seen since the week one win over St Louis? No. Was it a solid win? It was. Any win on the road in the NFL is a pretty good one.

Six receptions, 131 yards. Those were stats of one Brent Celek, who was filling in for the injured LJ Smith. Celek was fantastic today. He made tough catches, he ran for tough yards after those catches, he took some decent hits, made big plays... I honestly never thought Brent had a game like this in him. After a game like that, I'd start him next week whether LJ is healthy or not.

This has become somewhat of a theme this year. McNabb starts out poorly, throwing balls off target, looking totally out of sync... Then he settles into a groove and looks pretty good. He really got locked in after a poor first quarter, throwing just one incompletion during the Eagles 4 first scoring drives. He finished the day with a leauge leading 349 yards passing for 2 TDs. He ended up completing over 65% of his passes.

Stat of the day

One. That's the number of penalties the Eagles committed. That one was a flag for a Stewart Bradley horse collar tackle well after the game was decided. That's the kind of disciplined, virtually mistake free kind of play that wins games in this league. The Eagles domination in time of possession certainly helped as well. 37:15 for Philly to 22:45 for Seattle.

Todd Herremans? I thought the play that ended in a Todd Herremans TD catch was brilliant. That's the kind of creative, out of the box playcalling that should help shake some of this teams' goal to go struggles. Most teams aren't going to be paying much attention to the starting left guard down there... Amazingly enough, that was the first time an Eagles interior lineman has caught a TD pass in 74 years.

Ok, so Lito bit bad on that first play and got burned. Not a great moment... but after that first play, the Seahawks did not score the rest of the game. What more cna you ask for? I thought the secondary played particularly well. Asante Samuel and Sheldon Brown both jumped routes and knocked a couple of sure catched away a piece. Quintin Mikell made one fine jumping pass breakup, and Brian Dawkins made a nice play to seperate a Seattle WR from the ball after he had made a great diving catch in the end zone. They held Seattle to just 4-15 on third downs and 233 yards of total offense. Late in the game, the Eagles ended up sacking Seneca Wallace 4 times.

Here's a real crazy stat to underline how well the D played today. The Seahawks only crossed into Eagles territory three times in the final 3 quarters of the game.

A road win is a good win in the NFL. Especially when you travel cross country to face another NFC team. No doubt the Seahawks are a weakend team thanks to a rash of injuries to key players. The game started out very poorly on both sides of the ball, but once the second quarter came the Eagles really controlled this one from there on out. I'd love to have seen a few of those FGs turned into TDs, but overall by the time halftime rolled around the Eagles never looked like they'd lose this game.

We've now got a 3 game win streak in which we've won three conference games. We're out of the basement in the NFC East, which is now occupied by the team everyone picked as the sure fire super bowl champions before the year. We're two games out of the division lead with two games left to play against the division leaders. The Eagles still control their own destiny. Next week, we get to see what this team is really made of when they host the New York Giants in a prime time matchup next weekend.