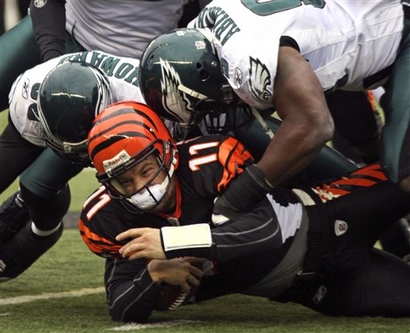 Anyone remember the last time the Eagles tied a game? Exactly 11 years ago today on November 16th, 1997 when they tied the Baltimore Ravens in Baltimore 10-10.

As the final second ticked off the clock today I recieved the following text messages.

What a horrible boring game

Amazing how just a few characters sent electronically through the air can sum up the feelings of a city so well. A f-ing tie!?

So rare is a tie in the NFL that Donovan McNabb didn't even realize it was possible.

"I didn’t know that," said McNabb, who played a leading role in keeping it tied. "I’ve never been part of a tie. I never even knew it was in the rule book. I was looking forward to getting the opportunity to get out there and try to drive to win the game. But unfortunately with the rules, we settled with a tie."

Is he being serious? Is there anyone that didn't know games end in a tie after one overtime quarter? The last tie in the NFL was back in 2002.

How is this for a run pass ratio?

Donovan McNabb threw a career high 58 times. The Eagles running backs combined for 15 carries. 58-15. In total, the Eagles actually ran the ball 18 times with one being a McNabb QB sneak and two being Desean Jackson end arounds that netted three total yards. So the run pass ration in today's game was just about 75-25. That's absolutey ridiculous. What's worse is that this wasn't a game where the Eagles were down big and needed to throw to stage a comeback. The Bengals only scored 13 points and there was no time in this game that the Eagles were not within easy striking distance.

If we take this back a game and include the loss to the Giants, Donovan McNabb has thrown the ball 94 times and the Eagles running backs have carried the ball 30 times.This team isn't struggling to run the ball ladies and gentleman, they aren't even trying. When your running backs run the ball 15 times a game there's no way to tell whether your running is any good or not. You simply don't have one. No team running the ball 15 times a game will ever have an effective running game in this league... or an effective offense for that matter.

That is a failure of playcalling and there's no other way to look at it. Which brings us to our next headline...

McNabb was a problem, but not the problem

Let me get this out of the way. Donovan McNabb had one of his poorest games in an Eagles uniform. He completed less than half his passes, he was off target and wild all game, and he threw three interceptions which were ALL his fault. There's absolutely no excusing the kind of game he had today. He started off the game in the poor fashion we've become accustomed to this year but never got himself in the groove. He was just as bad at the end as he was at the start.

That said... Could someone explain to me the logic in throwing the ball nearly 60 times when your QB is playing that poorly? It's inexplicable, it's stubborn, it's illogical, and it's just plain stupid. Albert Einsten once said "The definition of insanity is doing the same thing over and over again and expecting different results."

I'd say it's official. Andy Reid is insane. Nothing is going to change either, Andy has made his philosophy regarding these situations very clear. "Just keep firing"

I wonder if Jeff Lurie is thinking Andy might have a good idea there?

The only thing that made htis game even worth watching was the outstanding play of the Eagles defense. This unit was embarassed by the Giants last week and run on to the tune over 200 yards. Today, the Eagles shut down the Bengals run game, holding them to less than two yards a carry for the game and a total of 58 yards.

They also sacked Ryan Fitzpatrick eight times. This was a destruction on the part of the Eagles defense. The only thing they didn't do today was score... unfortuntalely.

Trent Cole was huge in his return to his hometown recording two sacks and generally creating havoc all day. Darren Howard continues his suprising season with two more sacks and like Cole was generally in the middle of the action whenever he was on the field. Chris Clemons also had a nice game today. He got a sack, played the run well, and played all over the formation. At different times I saw him at DE, outsider backer, and even playing LB in the middle in coverage. If he's going to play like this I hope we see him on the field more often from here on out.

I also have to give props to Stew Bradley who had another great game. That guy is one of the pieces we need to be building this team around. He's certianly one of the things that's "right" with this team this year.

Like Andy Reid, Jim Johnson is also set in his ways about certian things.

Asante Samuel had another great game shutting down whoever he covered and knocking down 4 passes. His stellar play all day made it pretty frustrating to see TJ Houshmenzadeh abusing Joselio Hanson play after play. Jim Johnson has generally always stuck his philosophy of having his corners play one side of the field and not reacting to where the WRs line up... but what sense does it make to stick Asante out to cover the Bengals #3 when they're lining up their hottest WR in the slot. Is it too much to ask to move Asante to wherever the other team's best WR is? Joselio Hanson isn't supposed to be able to shut down a guy like TJ, that's why Hanson is the team's 4th corner and Asante Smauel is one of the highest paid corners in the NFL.

Is it me or is this the first time someone has missed a big kick against us in FOREVER? Just our luck that a guy misses a potential game winning FG with almost no time left and we still don't win the freaking game.

A tie is a loss

If you're looking for a way to explain this game or how to feel about it. That's it. A tie is a loss. It's that simple. Especially when you're playing a one win team and you're fighting for you playoff lives. A tie is a loss.

"I’ve never been in a tie, so I don’t know how this works in the standings," coach Andy Reid said. "I know it’s not good enough. We need wins, and this is not a win."