Share All sharing options for: Trent Cole relishing a trip a home 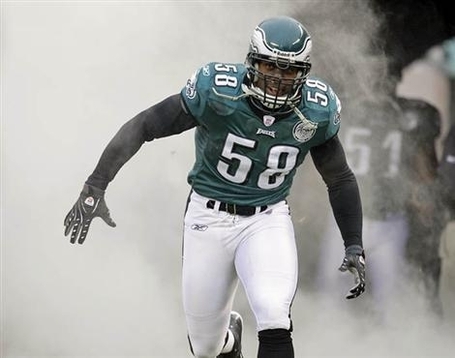 Trent Cole, a Cincy area native, expects to have himself quite the cheering section when the Eagles visit the Bengals this Saturday.

There's probably going to be a section up there," Cole said. "A b-i-i-i-i-g section."

"I grew up a Bengals fan," he added. "I remember the days with (former Cincinnati running back) Ickey (Woods). The Ickey Era, those were some good times."

Trent said he planned to hit some of his old hangouts while back in town.

Come gametime however, Cole is not likely to be in a good mood.

Cole called the Cincinnati offense "dangerous," but added that he expects Sunday to be a good one for the Eagles' D, which is coming off a 36-point gouging at the hands of the 8-1 Giants.

"They better hope we have a bad day," Cole said. "We just came off a loss, so we're kind of upset about that and we're going to take it into this next game."