Share All sharing options for: It's Hank Baskett's world 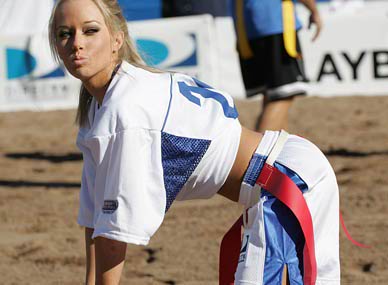 Hank Baskett has certainly raised his profile in the world the past couple of weeks with his announcement that he was marrying playmate & Girl Next Door star Kendra Wilkinson. His name and face have shown up on every gossip show and magazine... I can say personally that this site has gotten a whole bunch of hits from people searching for info about Hank.

This week Hank showed up in People magazine. HHR found some choice quotes.

"Hef is like a father to her so he's going to be the one to give her away,"  "That's why I wanted his blessings and her mom's blessing."

Bear in mind here that Kendra used to be Hef's girlfriend....

Baskett complimented his bride-to-be for her compassion, saying, "Kendra has one of the biggest hearts and that's one of the things that really drew me to her."

Her big heart is located behind her giant... well you know.

We kid, but seriously if she makes Hank happy then great for him.