Share All sharing options for: Chad Johnson thanks Donovan McNabb 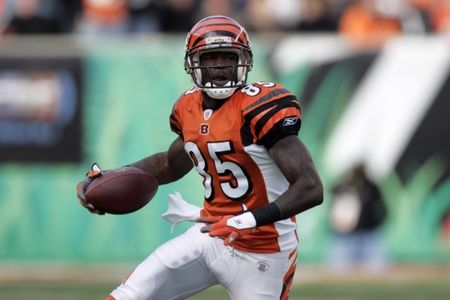 In today's Daily News Chad Johnson talked about how Donovan McNabb helped counsel him through his tough offseason.

"Donovan is one of the people that I confided in during the offseason when things weren't going well for me," said Johnson, who has 37 catches for 349 yards this season for the 1-8 Bengals. "I just wanted the input of a veteran who understands the things that are going on. At that time, with me being frustrated by losing, I looked at some of the people that were close to me, like Donovan and Ray Lewis and Deion Sanders - and Donovan was a big influence, and is really one of the reasons why I really turned myself around and looked at my situation in more of a positive outlook.

"Just thinking about all of the people that would love to play this game, and he took me in that direction instead of thinking about, 'I'm tired of losing and I don't want to be here anymore.' Just thinking about, 'Man, a lot of people wish they were in your shoes, just to have the ability to play in the NFL.' And that kind of turned it around, and that's why I've been as positive as I have been this year. And even though we're losing, man, I've just been plugging away."

Asked whether Chad would be interested in joining McNabb with the Eagles..

"The fans in Philly are the real deal," Johnson said. "That'd be a real joy to be able to give them a treat."