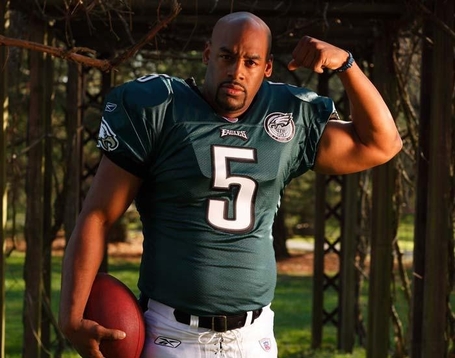 Or at least he's trying to... It's been well publicized that after the loss tot he Redskins Donovan McNabb called a players only team meeting in an attempt to right the ship. At his press conference yesterday he spoke about the meeting.

"I called it because I thought it was definitely needed," McNabb said. "It was something people needed to hear. If you're sitting here 2-3 and think we're OK, then you're wrong. You can be an older guy. You can be a younger guy. It doesn't matter. If there's something you want to say, get it off your chest. I felt it was needed.

"This isn't something in which you want to stand up and say, 'I'm the leader,' " he added. "You set the tone by getting out there on the field and doing it, and if you have something to say, you speak about it. It's something that people take heart in what we're doing. You have to enjoy your job, have passion for your job, and my passion relies on me going out and doing what I have to do and winning. And if we're not doing it, then I have a problem with it.

"I think everyone has to understand what situation we're in. It's a one-game-at-a-time approach, but you have to have a sense of urgency to go out and change that."

Brian Westbrook and Brian Dawkins were supportive of McNabb's meeting.

"As a leader on this team, you expect things like that from him," Westbrook said.

"He's straight, direct, blunt and honest with his situation, with himself, first, which I think is always a great leadership quality," free safety Brian Dawkins said, when asked about McNabb's manner. "You deal with yourself and your issues first, as far as what [you] need to fix, and then call it as [you see] it with the rest of us. I think, hopefully, to a man, we understood. I know I did, anyway . . . I'm on the exact same page with him.

Lorenzo Booker seemed to get the point.

"You could have heard a pin drop in there, that's for sure," said second-year running back Lorenzo Booker. "Really, there's no more time to talk. Yeah, we know we're good, but that doesn't matter. The fact of the matter is we're 2-3, so we can sit up here and talk about how good we are or how close the games are that we lost, but we still lost. Everybody knows we have to start putting this talk into action or we're just going to be average."

We should see just how much McNabb's words have sunk in this Sunday.