Klecko to FB, Hunt back to RB

Share All sharing options for: Klecko to FB, Hunt back to RB 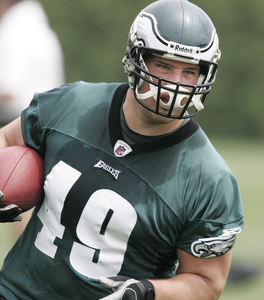 The Eagles are getting desperate creative with their backfield situation. With the possible absence or limited availability of Brian Westbrook this weekend, the Eagles have moved Dan Klecko back to FB and have told Tony Hunt that he'll practice at tailback this week. Bowen has he details

Fullback Tony Hunt said he has been told he will take his practice reps at running back, where he played before being switched near the end of training camp. Defensive tackle Dan Klecko, signed last spring with the idea he would be a fullback, has been reissued his old No. 49 jersey and apparently will play an expanded role at fullback while still participating in the defensive tackle rotation.

Some of Klecko's snaps at DT could be taken by Victor Abiamiri who returned to full practice yesterday.

In trying to decide how I feel about this move I decided to make my own list of pros and cons. So here goes.

Clearly the cons outweight the pros here. The Tony Hunt at FB experiment hasn't worked and frankly I'm rather excited to see him back at running back. I just hope the Eagles actually give him some carries this weekend. For a team that has had so many struggles on the goal line, you might think a powerful, bruising runner like Tony Hunt was supposed to be might be of some help there?

It's really started to annoy me that the Eagles have spent a 3rd round pick(Hunt) & a 4th round pick(Booker) on running backs the last two years and have so far pretty much refused to play them. Having lost their top RB for a good portion of the year so far, the Eagles have just let two guys they invested decent picks in just rot on the bench or out of position.

As for the Klecko to FB move... why? Who on this roster is so indispensible that we just can't make some room for Jed Collins to come up from the practice squad? I think it's safe to assume that Collins is a better fullback than Klecko since he did beat out Klecko in camp at the position. So why not go with your best option there? Especially considering how surprisingly productive Klecko has been at DT?