Midway through Sunday's game Desean Jackson disappeared. That much I think we can all agree on. 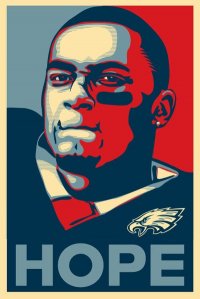 Why it happened? That's anyone's guess, including Desean's.

While Jackson found himself ignored in the Eagles offense for most of the game, he found himself surrounded by reporters afterward. The common theme of the inquisition: Why wasn't your number called more often?

"I don't really get caught up in that," Jackson said.

"Whoever's number is getting called, that person has to make the play," he said. "If that was my number, then I have to go out there and make a play."

From the second quarter on Jackson was thrown to once and handed the ball on an end around another time. That's it. He had a few nice plays on the first drive, the great punt return, and then got ignored. With the offense completely stagnating how can anyone justify not trying to get the ball into the hands of arguably your second best offensive weapon? Of course, Reid had no real answer.

"That was just the way it worked out," Eagles coach Andy Reid said. "Washington was in man coverage quite a bit of the day, and it just didn't work out that we could get him dialed up."

Gary Cobb was equally perplexed at the lack of playing time Jackson got in the second half... and he was angry about it.

It is total incompetence to not have this young man on the field with the other team playing a lot of man to man coverages. It is coaching malpractice to fail to put your best players on the field and put them in a position to make plays. How can you make plays when you're on the bench and not throwing to you when you get into the game.

Cobb's contention is that the team's offensive leaders, Westbrook & McNabb, need to "demand" more playing time for the rookie. Frankly, I think those guys should be worrying about other things... but I do agree that someone needs to ask why Jackson was not on the field or not targetted when he was in that game.