Share All sharing options for: Four downs with the Redskins: Pt 2 Defense 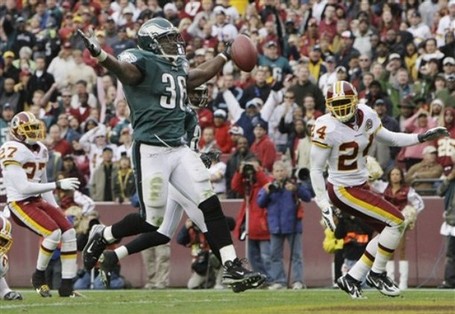 Will the Redskins see this guy on Sunday?

Yesterday we went 4 downs with the Redskins offense, today I pick the brain of Will from Hogs Haven for 4 downs on the Redskins defense.

My answers to his 4 downs are over at Hogs Haven.

BGN - The Skins are near the bottom of the league in sacks so far this year with just 6... what do you blame for the lack of pressure?

Bad defensive line. Greg Blache is more reluctant to blitz than our former D-Coordinator Gregg Williams. We lost one of our starters in Phillip Daniels and replacement Jason Taylor, when he's been able to play, has been good but not great. Our ends against Dallas, for instance, were Demetric Evans and Andre Carter. Carter is a beast, but even he can't beat consistent double teams. Our interior is good but you aren't going to generate most of your sacks from those guys, anyways. I think the sacks we have had were mostly coverage related. What needs to happen to improve is either an increased emphasis on the blitz or Taylor needs to return to form. In any event, I'm distressed by the lack of production out of defensive line but not by the defense as a whole, so maybe this is one of those, if it ain't broke...

I'm assuming this next question will piggyback your answer to the last question... what is the status of Jason Taylor for not only this weekend but going forward?

Last I heard he was participating in practice on an extremely limited basis and Jim Zorn expressed doubt whether he'd be able to play this week. What a bizarre circumstance... he's got an injury, no big deal, oh wait it is a big deal and might have required amputation if untreated much longer, actually just kidding not so serious? The whole thing baffles me. All I know is that he appears to be fine, now, but might not be a go for this weekend. In his stead it will be Demetric Evans with a rotation consisting of some mish-mash of Chris Wilson, Rob Jackson, and Erasmus James.

Brian Westbrook will likely be a gametime decision this weekend. How will the Redskins strategy change if they don't have #36 to deal with?

He's such a huge part of your offense that it certainly would be changed. I think the team immediately gets a little more comfortable bringing pressure with more than just the front four, as you don't have this terrifying safety valve who can nom nom nom yards after the catch. You also don't have to constantly account for him, as Westbrook can line up anywhere and do extensive damage. I wouldn't snooze on Buckhalter by any stretch of the imagination -- he's not having a bad season? -- but he's just less of a concern than Westbrook. Regardless, we've game planned to play against Westbrook so should be ready, to the extent anyone can be ready against him, come Sunday.

4. Name me one player on this Redskins defense that Eagles fans might not be that familiar with, but you think could have a big impact this Sunday?

If you haven't heard of him yet, he's having a huge year, Chris Horton. He's a ball hawk and an opportunist and a thief and a vandal and all those things combined. He has awesome hair. He can see in infrared or ultraviolet. He's essentially nabbed the starting safety spot of Reed Doughty and now lines up regularly opposite LaRon Landry. A huge part of our success thus far this season has been Horton playing so well and generating turnovers.

Chris Horton does have the Asante Samuel hair... does he have the skills to match? We'll see.