Is the Eagles run defense back?

Share All sharing options for: Is the Eagles run defense back? 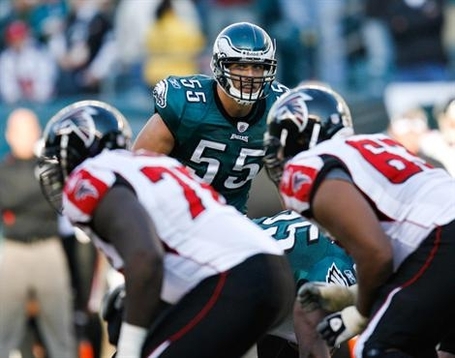 Through the first 4 games of this season the Eagles boasted the stingiest run defense in all of football. The list of backs shut down or hel well below their average was impressive.

At that point the Eagles were giving up twenty less yards per game on the ground than the second best run defense in the league. Clearly, they weren't going to be able to keep up that pace... but no expected the Eagles run D to drop off quite as bad as it did.

Suddenly. the Eagles run defense didn't drop off just a bit... it was porous. A big part of that problem, especially against the Redskins, was how much success teams had running off the edges. So when the Falcons and the NFL's 3rd leading rushing Michael Turner came to town there was reason to worry. Turns out, it was was no worry at all.

Plus, almost half of Turner's 58 yards came on a single play. So aside form the one big play, the Eagles held him to less than 3 yards a carry. This time, says Jim Johnson they sealed the edge.

In the 27-14 victory over the Falcons, "we really tackled well and we had a lot of people around the football," Johnson said. "We set the edge."

Turner "didn't get outside except for maybe one play," he said. "We didn't have a lot of missed tackles."

There's no doubt that if the Eagles make the playoffs this year, it's going to be because they continued to stop the run. Especially in the NFC East.

So far this season, rushing yards against the NFC East have come hard. The Redskins are second against the run in the NFC, the New York Giants fourth, the Eagles sixth, and the Cowboys seventh. There's little doubt the teams that continue to do the best job against the run will have a much better chance of playing in the postseason.