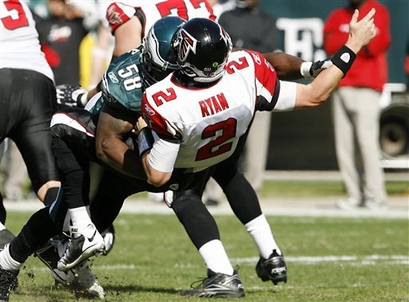 Not a dominating win, but a good win nonetheless. The game was probably closer than the score suggests, but a win at home against a suprisingly good Falcons team to get back over .500 is one we should all be happy to see.

Before this game a reader of the Falcons blog, the Falcoholic, asked me the following question.

AuditDawg: How much of an impact should Westbrook's return make to the Philly offense?

JB: I'm trying to think of the most outrageous possible hyperbole here... All joking all aside his return should be huge.

Suffice to say I think Westbrook vindicated me there. 22 rushes, 167 yards, & 2 TDs. He averaged over 7 yards a carry... He added 6 catches for 42 yards for good measure. Today we saw the Westbrook we all know and love, and if he manages to stay healthy for the rest of this year it will mean nothing but good stuff for this offense. The Eagles dominated on the ground today, which won them the time of possession against a ball control offense and that ultimately won them the game.

Horrible officiating for BOTH teams

The call on the muffed punt near the end of the game was a horrible one. There's no denying that. You could see from the replay that it never touched the returner and should not ahve been Eagles ball. However, that call was no more blatant or worse than the laughable roughing the passer call on Trent Cole early in the game. Just because that call didn't come near the end of the game doesn't make it any less of a joke. It wasn't roughing the passer by any stretch of the imagination.

Plus, Atlanta coach Mike Smith has to take some blame there. Had he preserved his timeouts he would have been able to challenge that play and would have won it. Still, it's a tough break and is sure to leave Falcon fans wondering "what if?"

McNabb gets his legs back

It was great to see McNabb scramble some more out there today. There was the TD run on the QB draw plus a great scramble for a 1st down where he hopped over a defenders' tackle that really stood out. He overcame some early innacuracy to have a pretty decent day passing as well with 253 yards. It was also good to see how well he spread the ball around today. He had passes of 30, 25, 21, 27, & 20 all to different receivers. That's tough to defend.

This was easily Lito's best game of the year. Lito had 3 pass defenses and one big INT in the end zone. What was most impressive is that his pick in the end zone came right after he was flagged for a big interference call which put the Falcons near the goal line. A corner has to have a short memory and be able ot shake off that kind of stuff. Lito did just that.

In the end, this was a big win. With both Dallas and Washington winning today the Eagles needed a victory to keep pace. We pulled ourselves above .500 with a solid win over another decent NFC opponent. There's no doubt that there's things from this game that could use improving. The second to last Atlanta drive where Ryan was able to march them down the field and score was not something we wanted to see. The three and out when we got the ball back after that was poor... The fact that we failed to score on a goal line trip(despite a call for the sneak) is concerning... But overall we can't minimize what this win means. It's big.