Share All sharing options for: Scouting the Falcons defense 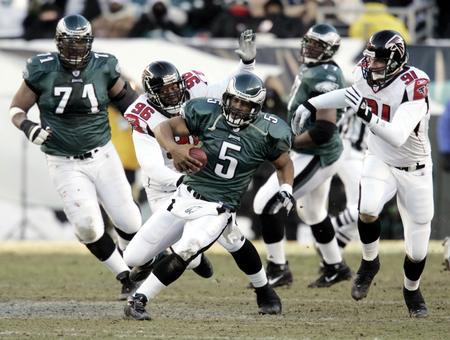 The Atlanta defense is very much the definition of "bend but don't break." For the amount of yards they give up(about 350 a game), you'd think they'd be giving up more points than they do(21 p/g). Of the bottom ten teams in league as far as yardage allowed, no team allows less points than the Falcons. Certainly part of the credit must go the Falcons' offense, whose run first ball control philosophy has limited opponents chance to score on their defense.

Their pass rush is a somewhat similar contradiction. On the whole it's one of the worst in the league tied for the 5th fewest sacks with just 10. However, they employ one of the bes pass rushers in football right. John Abraham currently has 7 sacks, the 4th most in football. So while the Atlanta pass rush is nothing scary overall, they do have one outstanding pass rusher that must be accounted for at all times. Marty Morningwheg knows this.

"He's unique," offensive coordinator Marty Mornhinweg said. "There are only a handful of guys like him.

"He's very difficult to move and he does a nice job that way. And he plays to his strengths that way, and he's very smart as well. Now, he is in and out of the game throughout the game, so you double him and he doesn't move, so that's one of his many strengths."

Marty attributes some of Abraham's success to the fact that he gets moved all over the defense during the course of the game.

"Some of it is scheme within their defensive structure and some of it is trying to get matchups," Mornhinweg said. "Anytime you move a guy from side to side, or outside to inside, or from down to the linebacker type role of a guy, it certainly does influence your preparation."

Atlanta's pass defense is a bit worse than it's run defense, but both units rank toward the bottom of the league. They've also struggled causing turnovers with just 3 forced fumbles, the second fewest in the league.

The key to beating the Falcons defense is to keep them on the field. Their offensive philosophy is going to be to keep the ball on the ground, play ball control, and keep their defense off the field. If the Eagles offense goes 3 and out a few times and the defense allows Atlanta to dominate possession with the run it's going to play directly into their hands. This is a game where we need to work that short passing game, work the run and wear down the atlanta defense. If we can keep them on the field, I really don't think that group has the talent to keep our defense out of the end zone.