With Andrews out, Max is the man

Share All sharing options for: With Andrews out, Max is the man 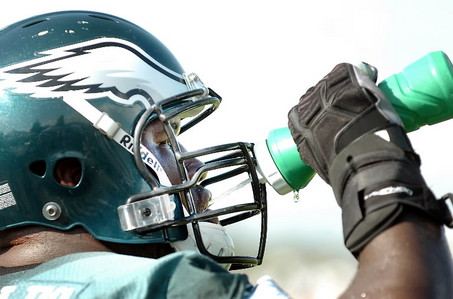 Despite the fact that Max Jean-Gilles has started virtually the entire year, the news that Shawn Andrews has had surgery has thrust Max into the spotlight.

Let's start by agreeing that Max is no Shawn Andrews. Few guards in the NFL are... but I think Max has done a decent job and most importantly he's gotten better as the season has rolled on. For a young guy(24) in his first real long term starting role, that's all you can ask.

''Max has done a very good job,'' Reid said. ''The thing that Max has done that I think is very important is that he's improved every week.''

''I think Max has done a great job of just filling in and has been able to get comfortable with the offense as well as communicating with the rest of the guys up there,'' McNabb said of the 24-year-old Jean Gilles, who first received significant practice and playing time during Andrews' absence in the preseason. ''Max is a guy who we trust in so many situations, whether it's run blocking or pass blocking.''

Brian Westbrook was complimentary, but realistic

''I think Max is doing a good job,'' Westbrook said. ''He's doing everything that we really expect out of him. I think that just goes along with things that we mentioned before that we haven't been very consistent with the run plays and just trying it and consistently calling those run plays and executing them when we have opportunities, and that's important in the run. We have to try and get that rhythm, and we haven't really gotten to that rhythm yet.''

Jamaal Jackson talked about how Max's conditioning has improved

"That dude can run," Jackson said of Jean-Gilles. "That's good, to have somebody 360 who can run."

There's no doubt that the best way to get in real good football shape is to play every week... Todd Herremans says Max's improved athleticism is opening the offense up

"If you'd asked me a while ago, I'd have said we ran more screens with Shawn," Herremans said. "But I don't think that's true now."

We all remember Max's pancaking of 49er linebacker Patrick Willis... Finally, what does Max himself have to say?

"It's been a roller coaster," Jean-Gilles said yesterday. "I came to camp thinking I would compete for the left-guard job. I was thrown in at right guard. It's been a day-by-day process . . . just let the man upstairs deal with it."