Is TO slowing down and Joe Banner on Roy Williams

Share All sharing options for: Is TO slowing down and Joe Banner on Roy Williams 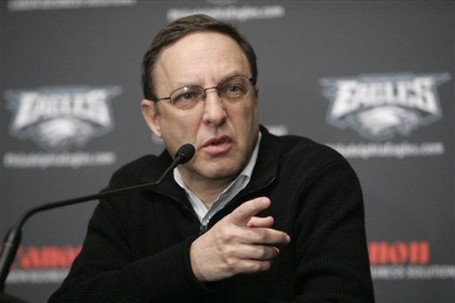 Somewhat out of the blue two interesting articles about the Cowboys showed up in the Philly media this week. First, Eagles president Joe Banner gave his thoughts on the Cowboys acquisition of WR Roy Williams.

"I mean, they paid a lot,'' said Banner, who confirmed the Eagles (3-3) did attempt to trade for Kansas City Chiefs tight end Tony Gonzalez prior to the Oct. 14 deadline. "Time will tell. I wouldn't pay that much for a player like that.''

While addressing the team's approach to improving the roster, the Birds' president took yet another swipe at the Cowboys.

"Our goal is to win a Super Bowl, forget win a playoff game, which is something they are still working on,'' Banner said.

Reuben Frank gathered some numbers that suggest our favorite soon to be 35 year old WR may be slowing down.

Since Week 14 last year, T.O. has fewer yards than such household names as Greg Camarillo, Bobby Wade and Anthony Gonzalez and fewer catches than such superstars as Kevin Walter, Lance Moore and Tony Scheffler.

Heck, during that span T.O. hasn’t even been the best guy in the league with his name. Owen Daniels of the Texans has three more catches than T.O. since late last year.

That's only a few of Reuben's stats... He's got quite a bit more that seem like evidence of Owens decline. He also suggests that maybe the Cowboys themselves have seen it.

Maybe this is just a little blip for Owens. Maybe he’s about to heat up. But he turns 35 in six weeks. He’s been held without a catch of 20 yards or more in four of his last five games. And the Cowboys are so concerned about T.O. that they went out at the trade deadline and acquired Roy Williams and gave a guy with one career 1,000-yard season $54 million over six years.

Williams has three 100-yard performances in his last 18 games. He should fit right in.