Share All sharing options for: Phillies and Rays both scouted Desean Jackson 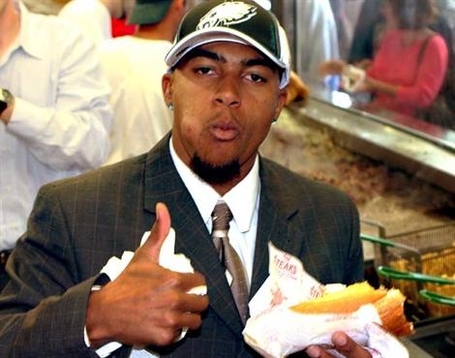 In addition to being a standout football player growing up, Desean Jackson was also a highly regarded baseball prospect.

In fact, when he was in high school Tampa Bay ased him to commit to playing baseball full time

DeSean Jackson, the Eagles' rookie wide receiver, remembers sitting in a class at Long Beach Polytechnic High School during his senior year when he got a phone call from a Rays scout on draft day.

Jackson, who went to the same high school as Chase Utley, was also scouted by the Phillies

"I saw him the summer before his senior year," said Tim Kissner, the Phillies' Southern California area scout. "He was a baseball player. He was definitely a baseball prospect."

He was the kind of baseball player who could kill with his speed, the same weapon that has made Jackson so dangerous for the Eagles through the first six games this season.

"The fastest amateur baserunner I've seen in 10 years scouting for Cleveland and Philadelphia," Kissner said. "I saw him run a 3.9 down the line and steal a base. Faster than Jimmy [Rollins] and Shane [Victorino]."

Not surprisingly, Jackson is pretty confident in his abilities as a baseball player...

"I was definitely pretty good," Jackson said. "I had a lot of speed. I was a leadoff hitter, and I'd get on and steal second base. Sometimes, I'd be risky and steal third. Sometimes, I'd even try to steal home. I led my league in steals and batted like .400.

"I thought about [baseball], and I didn't like the idea of going on long bus trips and playing in the middle of nowhere when it was hot. I know it takes a long time to get to the big leagues, and I couldn't see myself sitting in a hotel room watching football, because it's something I love."

It's a pretty interesting article and worth checking out, including a pretty cool anecdote about a certain hall of famer that Desean Jackson's dad lived with.