Share All sharing options for: Eagles finally getting healthy 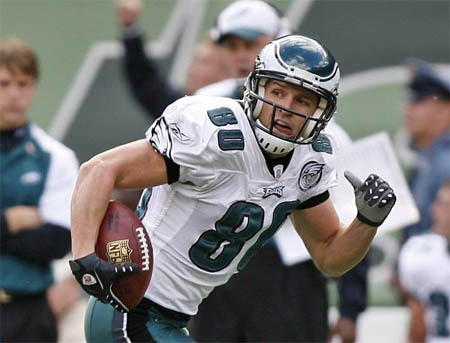 This weekend, for the first time this year, it's likely that Eagles fans will see Brian Westbrook, Kevin Curtis, and Reggie Brown all take the field. Curtis has missed all 6 games so far with a sports hernia injury he picked up preseason, Reggie Brown has missed most of the year with hamstring and groin injuries, and Westbrook has been sidelined with ankle and rib injuries.

Those three players accounted for over 72% of the Eagles offense last year... Suffice to say, their return will be welcomed.

"I'm just trying to get back into the flow of things," Westbrook said. "I've been off two-and-a-half weeks. I'm able to practice. I'm able to do some things. It's getting better. No, there's not so much soreness. No question, the week off made a big difference, and now hopefully I can stay healthy for the rest of the season."

"I feel good. I'm real confident in it," said Curtis, who underwent abdominal surgery Aug. 21. He traveled with the team to its final game before the bye, Oct. 12 at San Francisco, but was not activated. The Eagles were without Westbrook, Brown or Curtis that day, but banged out a 40-26 victory, on the strength of 23 fourth-quarter points, the final 13 provided by three 49ers turnovers.

"They kind of told me they'd try not to use me," Curtis said. "They told me to be ready, and I was ready, if my number was called, but I think the idea was to wait until after the bye week . . . It was good to just go on the trip. I was able to run around and prepare as if I was going to play. I think that's going to help me this week.

"Obviously, you can't substitute playing in a game situation . . . I've been working hard, I've been rehabbing, and I've been doing everything I can do to prepare myself as close as I can for that game situation."

"It's really frustrating. I'm kind of getting sick of it," the fourth-year wideout said. "It's hard seeing your guys going out there and fighting hard to win a game and keep this season going on the right path, and you're not able to go out there and help them.

"I'm just trying top figure out a way to keep my muscles right and keep them healthy," he went on. "Hopefully this won't be a trend."

It appears that the team is finally getting healthy. The interesting thing to watch now is first whether they can stay healthy and second whether all these returning players can gel into one potent unit.

One thing we'll certainly be keeping an eye on this week is how the return of both Curtis and Brown affects Desean Jackson's role in the offense... Does he lose his starting spot? My guess is no.