Share All sharing options for: Four downs with the Redskins: Pt 1 Offense

This week my pal Will, from the fine Skins blog Hogs Haven, decided to treat this game little more special(since it is) and deviate from our normal 5 questions segment. We've decided to each go 4 downs on both offense and defense. Technically that's 8 downs... but 8 downs isn't a fun football cliche! Not to toot my own horn here, but I think we've got some fantastic back forth on this game so be sure to keep an eye on Hogs Haven for my responses to his 4 downs. 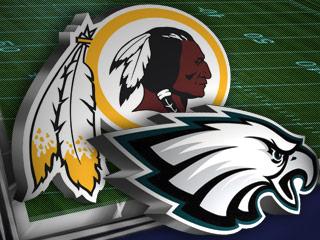 Today we go 4 downs with the Redskins offense.

BGN - Clinton Portis is in the top 5 in the NFL in rushing with a very nice 92 yards a game. The Eagles defense is ranked #1 against the rush giving up a ridiculous 53 yards a game. Something has to give! Which will it be?

HH - Uhh, yea that is pretty sick. Worse yet you're only giving up 2.6 yards per carry and DVOA is in love with your run defense. Our run game has looked sharp so far but your run defense has looked sharper, so the obvious conclusion is that, where give happens, it will tend more towards your defense than towards us. I think we'll probably do better than 2.6 yards per carry, hopefully better than 53 yards on the game, but a repeat of what we did to Dallas is unlikely. Teams aren't running the ball against you very often, probably because they can't; Coaches must realize early that your defensive front isn't going to let them go anywhere. I say: We will run around 20 times against you, your average is 21 per game, and will be slightly but not dramatically more productive against your front than the rest of your schedule has been.

How have your feelings on Jim Zorn and his offense changed over the past few weeks? I saw that week one game against the Giants and things were not looking very good... but since then you can't argue with the success.

Night and day, although some cautious optimism is always in order. I don't think the Arizona or New Orleans game effectively dispelled any lingering concerns from week 1. But going into Texas Stadium and beating the Cowboys, in a game that probably wasn't as close as the score, is a big enough win such that Redskins fans are feeling pretty strong about Jim Zorn right now. The play calling was excellent, as it had been in the previous games. Beating Dallas allowed us to view our previous two wins not as flukes, but as consistency on the part of the team. A come from behind victory against New Orleans, good, a convincing victory over Arizona that should've been by 14 points, better, and a division win on the road, best. I think the Giants have a great football team, and we had to play them at their home stadium filled with viciously partisan, angry, incited mob in the first real game since their Super Bowl victory. If the worst thing that happens to us this season is a 16-7 loss to the Giants on the road, we'll have a great season and Jim Zorn will be vindicated as a great first year head coach.

Jason Campbell has been incredibly efficient so far this year and hasn't thrown a single pick. What area of his game has he made the biggest improvement in since last year?

Hard to say because there are so many. Protecting the football has been huge, as last year he would've had something like 5 fumbles (lost) and two picks. Turnover margin in the games we have played has been, at times, very slim. Seven turnovers would have meant the difference between 3-1 and 1-3, or some such. When he gets sacked he doesn't fumble the ball, when the pocket breaks down he moves so, so much better to avoid the sack while still keeping his eyes down the field, or just running forward. While I'm sure he has done so, I can't recall a single instance where he made a boneheaded throw that lucked out of the hands of a defender. Although I sometimes wish he'd release the ball sooner, he is not forcing throws. And while doing all those enormously consequential things, he's found time to improve his completion %, YPA, etc.

Your boys drafted a whole bunch of high profile offensive skill position players in this year's draft. Malcom Kelly, Fred Davis, Devin Thomas... but so far none of them have made much of an impact. What are your thoughts on those guys?

One by one, Malcolm Kelly was criticized for showing up to camp unprepared and has been suffering from injury since then. It's always questionable whether he'll be healthy enough to play and has not done anything significant. Fred Davis has looked good the few times we've seen him so far (mostly preseason) but really finds himself in a bad spot. Chris Cooley is good enough to keep most TEs on the bench, and our other backup, Todd Yoder, is playing very well too. He blocks better than either of those other two and has good hands. It's hard to think of the opportunities that Davis can get. In the red zone or goal line, we're going with Yoder. On most running downs, we're going with Yoder. So... passing downs from the two TE set? We talked a lot after Davis was drafted about how effective that formation would be, but really haven't seen too much of it, with him in the lineup. Maybe he'll have a good day against a great run defense like yours, where there's some utility to putting in an alleged great but yet proven receiving TE on some running downs and going play action. We'll see, I think he's a talented guy who has done what he needs to do but finds himself in an unfortunate position. Devin Thomas, of the three, has gained the most favor from the coaches as he's been in a pretty healthy amount of snaps. He had a 70 someodd yard touchdown reception called back in the Arizona game due to a totally unrelated to the play personal foul penalty -- O-Linemen Stephon Heyer knocked someone down when he wasn't looking. That would've been a huge play for the team and him individually. You'll see Devin Thomas a bit this weekend.

Thanks again to Hogs Haven for the great responses. My answers should be up over there later today.