The Eagles Rushing Attack – Part I

Share All sharing options for: The Eagles Rushing Attack – Part I

Westbrook or Buckhalter – Does it matter?

Tony Hunt was recently released. When he was drafted many fans rejoiced – finally the Birds had their Thunder to complement Westbrook's Lightening. This celebration obviously wasn't justified and this week we got to waive goodbye to a third round draft choice.

In the Eagles version of the West Coast Offense, the running game is something of an afterthought. This year, the Eagles are actually only running on 38% of plays. In a regular game that means there are 23 carries which the Birds split evenly between the first and second half. A few carries go to wide outs on end-arounds and Donovan has had a couple of scrambles which count into the attempt totals for the team. The question I'd like to examine then is: With limited carries per game who should get the ball in the running game?

After the break, a rather stat heavy take awaits.

Brian Westbrook and Correll Buckhalter have played similar opponents. Brian was the featured back against St. Louis, Dallas, Washington, and started against Pittsburgh. Corell got the majority of the carries against Pittsburgh and started against Chicago and San Francisco. He actually got the first carry of the season against St. Louis where he broke off a nice 8 yard gain on second down. After the game against Chicago, there were numerous attacks against Buck's qualifications to carry the ball in the NFL. This reaction was simply not justified, Chicago is very good against the run ranking 5th in the league in yards allowed. Football Outsiders actually has the Bears ranked third in rushing defense DVOA. If that's not enough, Pittsburgh too is highly ranked, 2nd in yards allowed and 4th in DVOA. Four weeks removed from the unfortunate 4th down against the Bears, people are again warming to Buck the ball carrier and that's a good thing.

If we dig into the stats from the season so far, we can find that Buck has 48 carries compared to 54 for Westbrook (if we include his shovel pass for TD against the Rams). Twenty five of Buckhalter's carries came against two of the most challenging run defenses in the league. In spite of that fact, on a carry by carry basis, Buckhalter and Westbrook can barely be distinguished. Buckhalter is averaging 4.23 yards per carry and Westbrook - 3.63. There is a great deal more variability in Buck's rushing attempts however so it is not possible to separate the two backs statistically. The following chart shows the per carry result of both backs – at first don't look at the legend, and try to guess which back is which. 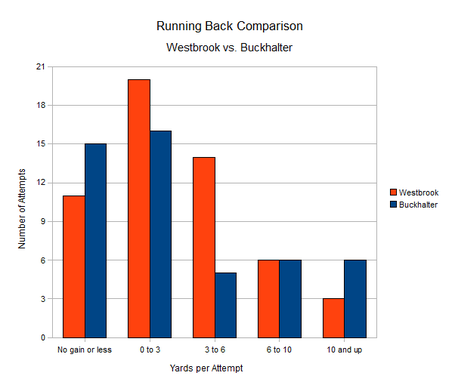 The surprising fact is that Buckhalter has 4 of the 5 longest carries on the Eagles season so far. This is counter balanced by the fact that he also has 15 of the 29 Eagles carries (including Hunt and Bookers attempts) that have gained no yards or fewer. These facts explain the variability in Buckhalter's rushing statistics, but we need to remember that a majority of his carries came against Pittsburgh and Chicago – two of the toughest running defenses in the NFL.

Given all of these observations, I ask again: Who should carry the rock? My answer is pretty simple, if Westbrook isn't 100% let Buck be the featured back – he's demonstrated that he can be just as productive as Westbrook and it's pretty easy to argue that he's actually been more productive than Brian so far this year despite fewer touches. When West is back to full health, Buck doesn't have the tools that make Brian such a threat in the backfield. With only 20 carries a game however, the Eagles should be sure to give them to the most effective back on the roster and right now, with Westbrooks broken ribs, I believe that back is Buck.

One troubling stat remains, the Eagles as a team are averaging 3.7 yards per carry. That number is truly ugly, good for 20th place in the NFL.  Arguing over who should get the ball doesn't help gain yards on the ground, but there are some things in the play by play which I think can shed some light on why we're so bad running the ball, but that's a story for Part II.