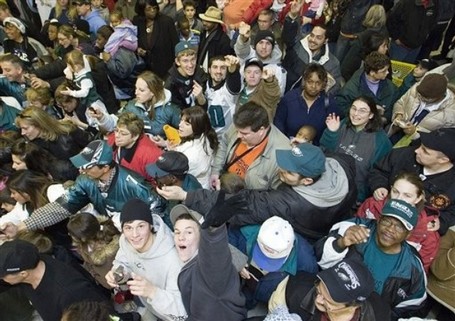 Interesting tidbit from a Sacramento Bee writer about last week's game. I have to agree, there looked like a ton of Eagles fans in that place.

Lots written today about Mike Nolan's odd challenges. I will add to that chorus, but first a subject that could and should be more distressing to the Yorks ... Philly fans. Lots of them. The Candlestick stands yesterday were covered with green, like some noxious weed grown out of control. A week after hearing the chant of "Let's go, Sox!" echo through the 49ers hallowed stadium, on Sunday it was "Beat, L.A.!" Sure, San Franciscans can get behind that sentiment. But from Eagles fans?

I grew up in the Mid Atlantic. I know people from Philadelphia. (Yeah you, Simon) Lemme tell you, there is nothing you want less in your home than a Philadelphia fan. The 49ers had thousands of them in their home on Sunday. I'm conservatively estimating there were 12,000 Eagles fans on hand. And if you doubt me, listen to the telecast. It sounds like the game was played at the Linc. It was like the whole city decided to spend Columbus Day in the Bay Area. To do list: Wine country. Alcatraz. Beat up on the 49ers.