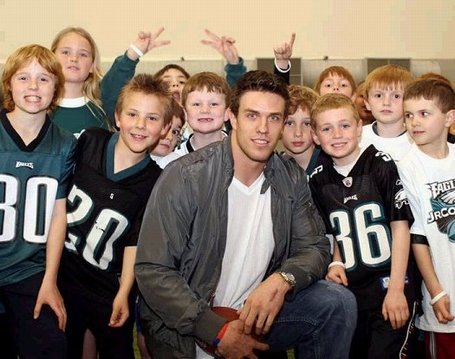 As is typical with the Eagles bye week, local writers usually take this time to pen more player focused stories. Some of it's just fluff, but some of it ends up being fairly interesting.

First up, we start off with our favorite writer (and many blogs favorite writer) /sarcasm Ashley Fox who had Jim Johnsons' thoughts on Stewart Bradley so far this year.

"He's a smart kid, and he's just seeing things well," Johnson said. "Every game he seems more comfortable. I think we'll see more production out of him as the year goes by.

"I think he's solid right now, handling the defense, getting guys lined up, making the checks, tackling well. He's around the football. That's all you can ask, but I think he can be more productive."

Everybody is feeling good about Correll Buckhalter these days after his great performance in San Francisco, and Buck talked about the humble beginnings that brought him to where he is today.

"My mom passed away when I was 3 years old, " Buckhalter said during a recent meeting in South Jersey. "My sister was only 3 months old and there was my older brother, my father and my grandparents, who lived a couple houses away. I had so many chores that I had to do daily. I was a country boy and my grandpop had a pig farm. Me and my older brother and cousins had to clean and fix the pens, put up fences. We had to do something every day.

"But you know what, all the chores and the hard work that we had to do molded me into the person I am right now."

It's pretty amazing to see Buck still performing at a high level after all he's been through. It would be tough for any athlete to come back from all those knee injuries, but for an NFL running back? It's almost unheard of.