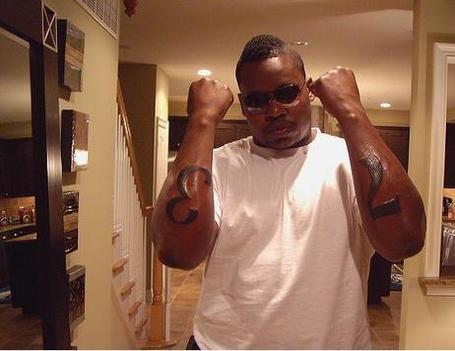 Shawn Andrews has been out of the Eagles lineup since the first half of the week 2 game against the Dallas Cowboys. The injury was initially called back spasms and the assumption was that it would just get better on it's own.

So the Eagles finally decided to send him to a specialist to get it taken care of.

Then he saw another specialist and another... with no results.

Now, the Eagles have sent Andrews to a fourth back specialist. One that the team is very familiar with.

Reid said all-pro guard Shawn Andrews, who hasn't played since experiencing back spasms in the first half of the Dallas game a month ago, was in Marina del Ray, Calif., yesterday visiting noted back specialist Robert Watkins, a spinal surgeon and co-director of the Marina Spine Center.

"He's not making a lot of progress," Reid said. "We'll see what this guy here says. He's worked on Tra (Thomas) and other big guys, and we'll just see how it works out. (Trainer) Rick (Burkholder) and I are going to try and exhaust every means to see what the problem is."

"He's still hurting," the coach said. "He just isn't getting better. Maybe this specialist will be able to help."

There's no doubt that missing a guy most NFL observers name as arguably the best right guard in football has had an effect on the offense. It's hard to say whether a healthy Andrews would have changed the Eagles fortunes on short yardage plays this year, but he certainly couldn't have hurt.

The good news is that Andrews' replacement, Max Jean Gilles, turned in his best performance of the year this past weekend in San Fran. As with any player, but lineman especially, Max Jean is only likely to get better the more playing time he gets this year. The most encouraging thing we saw from Max Sunday was him getting out in front of plays and making some big blocks downfield, something Andrews has always excelled at.