Has the NFC East been overhyped? 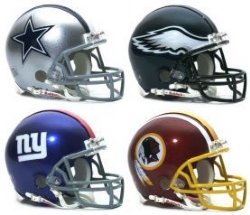 I'm certainly not declaring the division dead... but this weekend in the NFL surely has many people who were proclaiming the NFC East the best division in football reconsidering that stance. Let's revisit.

For all that has been written about how much better the East was than the rest of the NFC... it's worth mentioning that the NFC South now has three 4-2 teams and a very good 3-3 team in the form of the New Orleans Saints.

So where does that leave the Eagles? It leaves them controlling their own destiny. We currently trail New York by 2 games and Dallas & Washington both by 1 game. Luckily, those are the exact amount of games we have remaining against those teams. Even more good news is that the Cowboys and Redskins both now have 2 losses in the conference... meaning that if the Eagles beat them they will erase the tiebreakers those teams currently hold over them(barring other losses that could create a different scenario).

This is a far from simple road to the playoffs. Winning the next 4 games against the NFC East is by no means an easy task... but it's not a bad situation to be in given the Eagles poor start to the year. All we can ask for is that Eagles get to control their own destiny, which for now they do.