Share All sharing options for: Eagles win thriller over 49ers 40-26 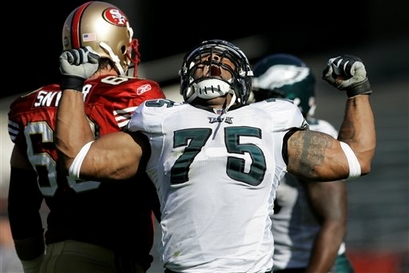 Honestly, I think the score flattered the Eagles a bit... we probably weren't 2 TDs better than the Niners today. I have to give that San Fran team and their young QB a lot of credit. For a little over 3 quarters they did a great job... This was a gutty win from the Eagles on a day that felt like we were going to watch another Eagles second half collapse.

Not this time though.

A game of runs

No Brian Westbrook, no problem.

What a huge game from Correll Buckhalter today! He was three yards shy of a 100 on the ground, where he averaged over 5 yards a carry and scored a TD. He also caught 7 passes for 89 yards. The man with bionic knees finished the day with 186 total yards and a TD. It was a Westbrook like performance and one the Eagles really needed today. The Eagles run game looked better today than it has all year. We'll have to cehck the tape but did Klecko at FB really make that much of a difference? I would say Buck is the unquestioned player of the game if not for...

New name for Juqua Parker and a new level of lay as well. Juqua got his team leading 4.5th sack, he had a huge tackle for a loss in the quarter where he read a TE screen perfectly, and of course he had the big INT return for a TD that iced the game. Really the whole defensive line really started to beat the Niners in the 4th quarter, but no one played bigger than Juqua.

The rest of the boys up front were pretty productive as well. Trent Cole had the big strip, Darren Howard had a sack, and Chris Clemons had a nice day with several pressures and a fumble recovery.

Besides just having a pretty damn good game, Donovan McNabb pass Ron Jaworski to become the franchise leader in both pass attempts and yardage.

And hey, the fade pass! McNabb to Baskett for 6. I thought McNabb couldn't throw the fade...?

With Dallas and Washington losing both in big upsets today, the NFC East race looks a lot more interesting now than it did yesterday. The Giants are still rolling along undefeated, but in 2 weeks their schedule will get much tougher than it has been. However, Dallas and Washington have both dropped to 4-2 and the Eagles, even at 3-3 are just a game back of them. Considering that we still have to play both teams again, they're absolutely within striking distance. Plus, after hearing so much this year about the vaunted NFC East... Two NFC West teams got wins against the East today and another gave the Eagles everything they could handle. The NFC South looks pretty damn good as well.

Overall it was an incredible day in the NFL with 5 games decided in the last seconds. Days like this remind us of why we do this every Sunday.