Share All sharing options for: Lito Sheppard wants to play 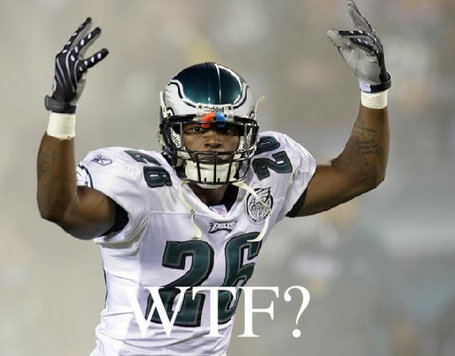 Lito Sheppard was a guest on CSN's Monday Night live and decided to use the platform to vent his frustrations at what he sees is a lack of playing time.

"If you say you want to win and do this and do that, then why aren't all your best players on the field at the same time?" Sheppard wondered. "It's kind of been swept under the rug in their eyes as far as not addressing (my) problem. They kind of want this year to ride out ... but that is not satisfying to me. I need to be playing and I'm more than able.

"From a business standpoint, we all know what the situation is (and) it's not handled. It's only going to get worse if it continues to go like it's going."

I've certainly criticized Lito in the past for some of the things he's done or said regarding his contract situation this year. However, I don't know if I feel the same way about his comments here. Clearly, they're connected to his contract situation and it's all part of the same problem... but there's just something about a player complaing about playing time that bothers me less than complaints about money. I'd rather Lito not air dirty laundry in public... but frankly I can't criticize him that much for wanting to play. Wanting to be on the field is a good thing.

Lito does say he wants to stay with the Eagles, but....

"Yes, but I have to start -- until I am given a reason that I shouldn't be starting. If health was one of the main reasons, I am completely healthy with no problems. I don't understand it."

Lito also said that he's been trying to make the 3 CB situation work... but estimates that he's only played 30% of defensive snaps.

"I was trying to take that approach, to make (the three-cornerback) situation work," Sheppard said. "But me not playing, there's no excuse for that. That's the only way this thing can work. If all of us are supposed to split playing time, that's all well and fine, but I need to be on the field somehow, some way. If that's not going to happen, then it's not going to work. What I'm saying is: I think I deserve to be on the field and I have given (the Eagles) no reason to change that thought. So, if you are not going to play me, I need an ex planation why. Let my fans, let the people, let the public know why Lito Sheppard is not on the field. I just know I have a lot to offer as a player. I want to play football and right now I'm not playing football."

Now, if no one from the organization has truly sat down with Lito and explained why he is in the role he is in... then they should. I think he at least deserves that. However, I would remind Lito that certain members of the organization(the owner) have pretty much told you why you aren't starting already. Remember? You got all mad? So Lito, on one hand you complain that they don't give you an explanation, but then you complain about the explanation you were given...